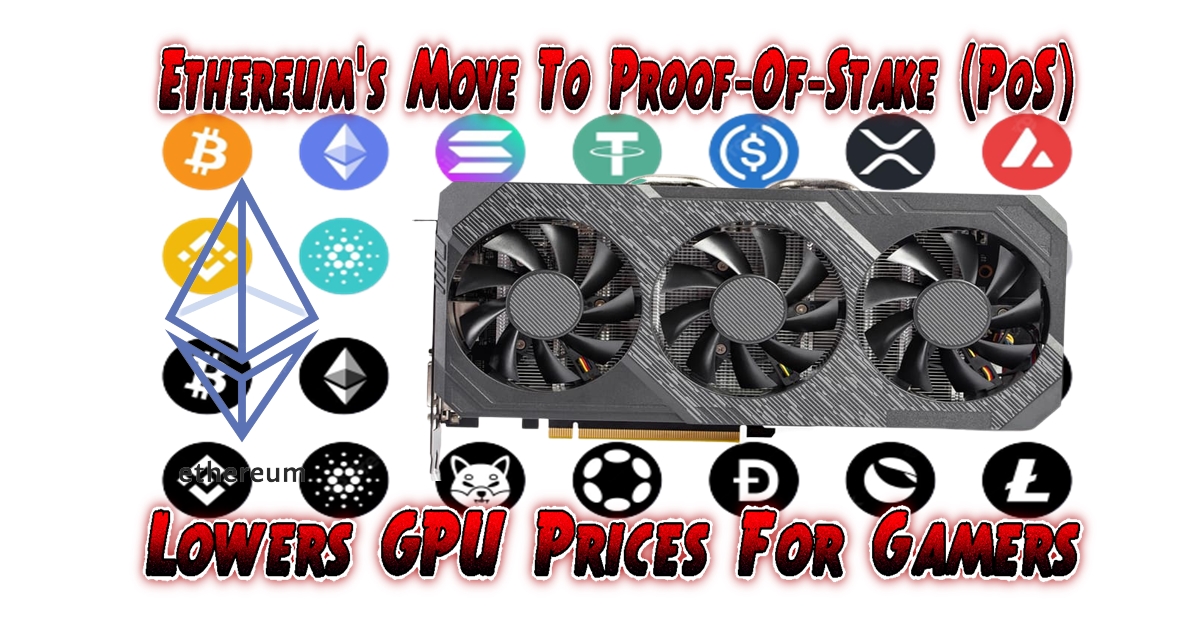 Video File:
As the world’s largest and second-largest cryptocurrency by market cap, respectively, Ethereum (ETH) and Bitcoin (BTC) are often compared. Both have their fair share of controversies, but ETH has taken a hit in recent weeks for its decision to implement a protocol called proof-of-stake (PoS). The new protocol will replace proof-of-work (PoW), which has commonly been associated with mining digital coins and the extensive energy consumption that comes along with it.
While PoW is resource intensive and has led to GPU shortages for gamers, is PoS the right direction for Ethereum? Let’s take a look at what exactly these protocols mean, how they impact mining, and whether or not you should buy GPUs now or wait until prices fall even more.

What Is Ethereum’s PoW And Why Is It Being Replaced ?

Ethereum’s PoW is the mining protocol that’s been used since the blockchain network was first launched in 2015. A network’s mining protocol defines how new coins are created, how transactions are verified, and how these processes are incentivized. PoW is incredibly resource intensive, requiring an immense amount of computing power in order to “mine” new coins and verify transactions on the blockchain.
This extensive energy consumption has led many to criticize the PoW protocol. In fact, Ethereum’s co-founder, Vitalik Buterin, has been vocal about the need to transition away from the PoW protocol for years now.

How Does Ethereum’s PoS Function ?

While PoS is less resource intensive than PoW, PoS will not be implemented in its original form as many believe that this protocol could have security issues. Ethereum Foundation’s chief scientist, Vlad Zamfir, has said that the protocol will be a “hybrid” of PoW and PoS. PoS will still require nodes to do a large amount of the same computations as PoW, only the group of nodes that verify transactions is set at a lower amount than in PoW.
Another difference between PoW and PoS is the way that new coins are created. PoW rewards users with new coins for their work in mining the network, while PoS doesn’t actually create new coins but instead gives transaction fees to the nodes that verify. However, PoS does not give any new coins to the Ethereum Foundation, so any organization that’s responsible for the upkeep of the network will have to be funded through other means.

Will The Implementation Of PoS Make Ethereum A Cleaner Cryptocurrency ?

PoS will definitely make Ethereum a cleaner cryptocurrency than PoW, but there’s no telling how much cleaner it will be. PoS is much less energy intensive than PoW, but the volume of Ether being mined will be the same or even greater, as the mining difficulty will likely rise. Still, the increased difficulty might make mining Ether more profitable, so the PoS transition could lead to higher mining rates.
The transition to PoS will also be a huge step towards making Ethereum more decentralized. PoW currently provides a huge incentive for big mining companies to enter the mining space, but PoS provides incentives for smaller mining operations. PoS also makes it more difficult for large mining operations to control the network, as it’s much easier to get started with PoS than with PoW.

Should You Buy GPUs Now Or Wait Until Prices Fall Further ?

If you’ve been holding off on buying a new GPU, you’ve probably been kicking yourself for not getting one when prices were even lower. However, you don’t want to buy a new GPU if prices are going to fall even further. This is what many believe will happen when PoS is implemented. The value of Eth will fall once PoS is implemented, as there will be less Eth being mined. This will lead to a drop in demand for GPUs as they’re currently the best option for mining Eth. If you’re looking to buy a GPU, now would be the best time to do it.

Final Thoughts: Is Proof-Of-Stake The Right Move For Ethereum ?

When analyzing Ethereum’s move to PoS, it’s important to remember that this is a tentative decision. More research and testing will need to be done before the PoS transition is implemented. There are many advantages to PoS, but it could also be a huge mistake. PoS will certainly make Ethereum a cleaner cryptocurrency, but it remains to be seen how much cleaner it will be. Ethereum’s PoW is incredibly resource intensive, so it will be interesting to see how much less energy PoS will use.
There are also concerns that PoS could lead to centralization, which is the exact opposite of what Ethereum wants. Overall, Ethereum’s move to PoS could be a great decision, or it could be a huge mistake. Only time will tell. Digital money is either the best thing ever or it's the death of society as far as we might be concerned today, contingent upon whom you inquire. Things are going to change for everybody, in any case, as Ethereum is switching(opens in new tab) from a proof-of-work (PoW) to a proof-of-stake (PoS).
On a fundamental level, this implies it's presently preposterous to expect to make a little fortune mining Ethereum with your GPU. Assuming NVIDIA has more old stock to push out, it might need to value the forthcoming RTX 40 series somewhat higher at send off or keep on dropping RTX 30 estimating.
This might rely heavily on how forceful the pre-owned market is with mining tasks flooding it with cards. In any case, Ethereum's transition to PoS(opens in new tab) flags the crypto mining frenzy is at long last reaching a conclusion and we ought to see a more straightforward cycle for gamers to purchase cutting edge cards.
POS Tech