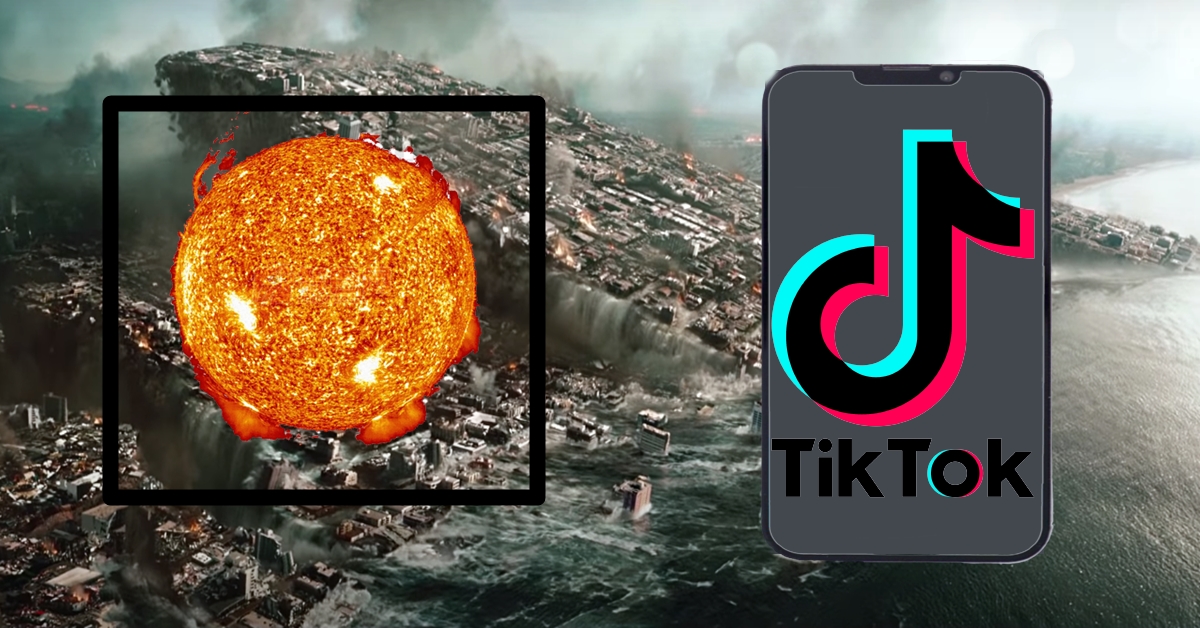 Video File:
The world is ending in less than two weeks. That's what social media influencers are saying about Sept. 24, anyway, and it's causing a worldwide panic. Some people are even giving up their homes and jobs to get away from the impending doomsday as fast as possible.
But why does this Sept. 24 theory keep going viral? Even if it seems like bunk, there must be something about it that’s striking a chord with millions of people globally and we've got the answers you need to know about the Sept. 24 doomsday conspiracy going viral on TikTok right now. Keep reading for all the wild details.

What Is The Sept. 24 Doomsday Conspiracy ?

A conspiracy theory is a theory that explains an event as caused by an unknown and mysterious entity (often related to a government coverup). These types of theories are often created to explain a puzzling event that can’t be easily explained by fact.
The most common conspiracy theories are those surrounding unexplained events like 9/11, the JFK assassination, and the rise of ISIS. The Sept. 24 doomsday conspiracy that is going viral on TikTok is a theory surrounding the end of the world.
According to the theory, an astronomical event is going to happen on Sept. 24 that will bring about the end of the world. People believe this because the theory is based on the anticipation of a planetary alignment caused by the sun, moon, and planets lining up in the same ecliptic plane (which happens every 2-3 years).

Where Did The Theory Come From ?

This theory is based on the supposed discovery of a new planet called Nibiru. Nibiru was supposedly first discovered by NASA in 2003. Those who believe in the theory think this new planet is on a collision course with Earth, and that it will pass between the Earth and the Moon on Sept. 24.
It’s believed that the gravitational pull from this “rogue” planet will disrupt the Earth’s tides and weather patterns, causing worldwide catastrophes that will lead to the end of the world. However, NASA has never mentioned a new planet called Nibiru, and many argue that it isn’t a real planet at all.
When the theory first came out in the 2000s, conspirators linked it to the works of a controversial author named Zecharia Sitchin. Sitchin’s books claimed that aliens from the planet Nibiru came to Earth 450,000 years ago to mine for minerals, eventually creating humans to be their slaves.
Sitchin claimed that these aliens were a race called the Annunaki. Despite Sitchin’s stories sounding like pure fiction, conspirators latched onto the “Nibiru” idea and turned it into a doomsday prophecy.

Is Nibiru Real ? Is It Responsible For The Theory Going Viral On TikTok ?

Is Nibiru real? Well, we can’t say for sure, but it’s almost definitely not what the theory says it is. Naming conventions aside, Nibiru doesn’t exist. It’s a completely made-up theory based on a completely made-up planet.
To be fair, there is a solar system called the Nibiru system, but that’s too far away to cause any harm to the Earth. The Nibiru theory is based on the idea that the solar system is aligned with the Earth. The alignment happens every couple of years, so it’s nothing out of the ordinary.

Why You Shouldn’t Believe The Sept. 24 Doomsday Theory Going Viral On TikTok

There are multiple reasons why you shouldn’t believe the theory going viral on TikTok. For one thing, the theory has been disproven many times before, but it keeps popping up in various forms and on multiple occasions.
One of the most recent times it went viral was in 2012, when the theory was that a rogue planet called Nibiru would collide with Earth and cause the end of the world. During the same year, the theory had a resurgence that was linked to the Mayan calendar.
People claimed that the date of Dec. 21, 2012, was the end of the Mayan calendar and that it would bring about the end of the world. 2008 was another big year for the doomsday theory, when conspirators thought the alignment of planets would cause the Earth to be hit by a radioactive cloud.
In 2003, the theory was linked to the 2003 invasion of Iraq and the supposed presence of weapons of mass destruction. There have been countless other times that the Sept. 24 doomsday theory has gone viral, but each time it’s been proven wrong.

Why did Friedrich Metz, German Member of Parliament say, “Dear Colleagues…September 24, 2022 will be remembered by all of us as a day which we will say, “I remember exactly where I was…”? pic.twitter.com/ldv4VstuAD

Unfortunately, the world is not ending on Sept. 24, and there’s no evidence to suggest that it ever will. Even if there was a planet called Nibiru (which there isn’t), it wouldn’t cause the Earth to be hit by a radioactive cloud or disrupt the world’s weather patterns.
The only thing that’s certain on Sept. 24 is that millions of people will keep on living and breathing, just as we’ve been doing for decades, centuries, and millennia. Another apocalyptic conspiracy theory went viral on TikTok - and there's a simple solution.
A German politician named Friedrich Merz, who posted on Twitter, “September 24, 2022, will be a day we will all remember, when we say, 'I was right where I was.'” He sparked several conspiracy theories about the consequences of a big solar flare striking the earth and causing tropical cyclones.
According to the Middle East Mashable, some factions of the internet believe that Trump will declare his candidacy for president again on September 24, 2022. NASA defines a solar flare as “a burst of electromagnetic energy caused by the release of magnetic energy associated with sunspots.” It is our solar system's largest explosive events, which last from minutes to hours.