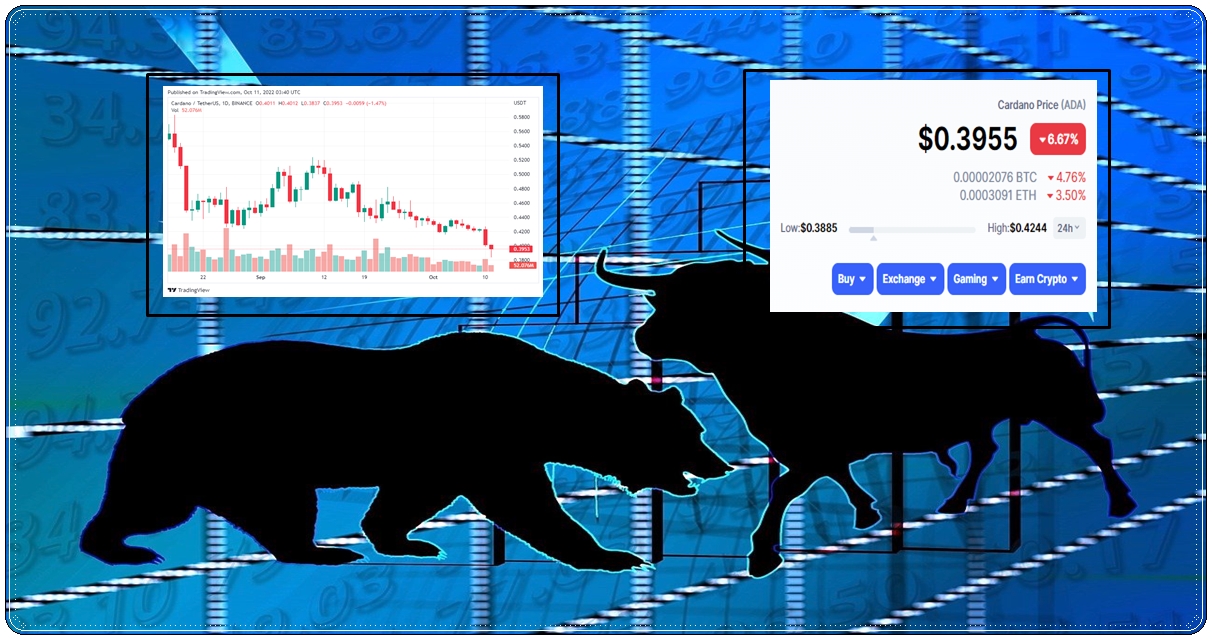 Play Video:
Cardano (ADA) is one of the top 10 cryptocurrencies by market cap. The open-source blockchain project offers a third-generation blockchain with the potential to become a leading platform for decentralized applications (dapps). With so much potential, it’s no surprise that investors are eager to buy ADA tokens.
But the recent bear market has made it challenging for investors to find an affordable opportunity to get in on this promising coin. Is now the right time to buy Cardano? Or should you wait until the price falls even further? Read on to learn more about whether you should invest in Cardano or sell ADA tokens and look for another opportunity.
The ADA price began wave five on August 2021 as a result of the symmetrical triangle (black). Therefore, we believe that wave four was a five-wave downward movement. Based on this confluence, ADA is predicted to drop to these levels. The ADA price has been trading inside a symmetrical triangle since May 12, 2019, as shown by the parallel channel connecting wave two and wave four highs.
Since the symmetrical triangle is a neutral pattern, it is most likely that ADA will drop from it after a downward movement. Since its all-time high of $3.10 on August 2021, ADA has been losing value. Because of the descending resistance line, ADA dropped to $0.40 on May 12, 2022.

Why Is Cardano Worth Investing In?

Cardano is the first blockchain project to be built on a scientific philosophy. The creation of Charles Hoskinson, one of the co-founders of Ethereum, Cardano is unique among blockchains because it offers a flexible and scalable blockchain protocol based on the principle of layered architecture. Cardano’s protocol is designed to allow for upgrades to be implemented without requiring users to hard fork the blockchain.
Cardano’s blockchain uses a proof-of-stake (POS) consensus algorithm to achieve high scalability and real decentralization. The protocol also features a treasury system, which allows for the delegation of decision-making power and rewards users who decide on the future of the blockchain.

How To Short-Sell Cardano (ADA)?

Since Cardano is a token-based digital asset, it can be traded in the same way as stocks. In fact, many cryptocurrency exchanges allow users to short-sell ADA. Short-selling allows you to benefit from the falling ADA price by selling a borrowed amount of ADA tokens. When the price falls and you buy back the tokens, you return them to the lender and keep the profit.
To short-sell Cardano, you must first find an exchange that allows you to do so. Bittrex and Bitfinex are two major exchanges that allow you to short-sell ADA. On both exchanges, you must open an account and deposit Bitcoin. This is because both exchanges only accept trading in cryptocurrencies.

Should You Buy Cardano During The Bear Market?

Like any other digital asset, investing in Cardano is a risky venture. Given the high volatility of the cryptocurrency market, it’s unlikely that the price of ADA will rise steadily. As such, there’s a chance that your investment may decline in value as the bear market continues.
However, if you take a long-term view and buy ADA tokens when they’re cheap, you may end up making substantial profits as the price rises again. In order to maximize your investment, you should wait until the price of Cardano drops by at least 50%. This way, you’ll be able to buy ADA tokens at a lower price and benefit from their potential growth in value once the market recovers.

What You Should Know About Buying ADA

While the future of Cardano looks promising, there are a few things you should know before buying ADA tokens. Firstly, it’s important to note that the Cardano blockchain is still in its early stages. As such, the project is still being built and its features have yet to be fully implemented.
Secondly, remember that ADA is a decentralized network that relies on its stakeholders for its development. While the Cardano team is working hard to deliver on its roadmap, investors who buy ADA tokens are also responsible for contributing to the growth of the network.

Is Now The Right Time To Buy Cardano?

If you’ve read this far and you’re still wondering if it’s the right time to buy Cardano, the answer is yes. While it’s true that the cryptocurrency market is unpredictable, it’s likely that the price of ADA will rise as the cryptocurrency market recovers. Cardano is a promising project, and it’s likely that this will lead to substantial gains over the next few years.
After all, even Bitcoin has suffered from a massive price drop in the past. However, it has recovered from these losses and is now worth 10 times more than at the start of the bear market. If you want to invest in Cardano, don’t buy ADA tokens during a price spike.
Instead, wait for the price to drop and then buy ADA tokens when they’re cheap. You won’t make as much money in the short term, but you’ll have a better chance of making a substantial profit when the price rises again.

Cardano is a promising blockchain project with a strong team, a unique code architecture, and a flexible and scalable protocol. Like any other blockchain, Cardano is a risky investment and may drop in value as the bear market continues. However, if you buy ADA tokens when they’re cheap and hold on to them, you may make a substantial profit when the market recovers.
ADA price is currently being affected by three bearish factors: price movement, technical indicator readings, and wave count. A target of $0.25 is imminent due to a confluence of Fib levels and channeling methods.